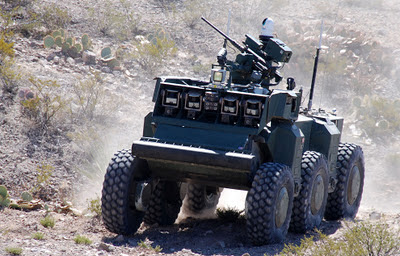 Imagine a fleet of these Crusher robots chasing you across the desert, relentlessly.  The Drone Wars are just getting started!


As a Defense Contractor, I got to see lots of neat toys at various government agencies, such as the Army Research Labs.  And as a Patent Attorney and aviation enthusiast, I get to hear a lot of inside stories about some of this stuff.  A lot of it is overpriced junk - these state-of-the-art fighters, for example.  And yea, now that Lockheed-Martin is a "person" according to the Supreme Court, you can forgetabout anyone being elected President who doesn't support the F-35 project, even though piloted planes may be obsolete.  Big money is affecting campaigns, and there is no bigger money than in the Military-Industrial complex.

It is true that wars tend to advance technology by leaps and bounds, albeit perhaps not in the directions we intend to.  WW I mechanized the military, brought us tanks, chemical weapons, the submarine, and the machine gun.  It also took aviation from a primitive toy to the mainstream.  And it put the coffin nail in the dirigible, even if it took another 20 years for the last of them to crash.

WW II brought us the nuclear weapon (and nuclear power), the jet engine, the missile, and completed the mechanization of the military (Hitler actually used horses, at the beginning of the war!).  It also brought us the aircraft carrier and showed us the futility of the battleship, although the last one wasn't decommissioned until after Reagan left office.

Vietnam perfected the helicopter as an aerial gunship, and also taught us some hard lessons on guerrilla warfare and counter-insurgency.

The wars in Afghanistan and Iraq have brought us the drone.  Drones have been around for a long, long time, but like the Wright Brothers' airplane, they were viewed as toys, with no real military value.  I wrote a Patent for Burt Rutan and Hugh Schmittle for a drone aircraft, back in the early 1990's.  Back then, drones, like the early aircraft of WW I, were used for observation only, and relegated to the backwaters of the military.  No one took these toys seriously, particularly not the "fighter-jock" community.  Men fought wars, not machines!  Oh, if that were only true.

My, how times have changed since then!   Drones have proven themselves to be the most useful part of the military.  Unlike an expensive fighter jet or bomber, a drone can be relatively inexpensively made.  And with a fleet of them in the skies, an eneny can shoot down 100 of them, and you still have 1000 flying.  They can be relentless.

And since they are not piloted, when they are shot down, you don't have to rescue a pilot - or be treated to a hostage situation, replete with videos on the TeeVee showing a battered pilot pleading for his life, as happened to Gary Powers.  Such things tend to turn the public away from a war, at least in the US, where we don't have the stomach for these sorts of things.

Drones, in contrast, are a godsend.  They are cheap, and they can "loiter" over a target long after jet fighters have to land.  Most jet fighters are so optimized for weight and thrust that, as one pilot put it, "the moment you take off, you have to think about landing."  They have minutes, not hours, of loitering capability.

And with infrared sensors, satellite photos, and all sorts of electronic intelligence data, you can target individual human beings - even reading the numbers off their license plates - push a button, and BAM! - watch it all blow up on TeeVee, from the comfort of your command center, on another continent.

And most Americans think this is pretty cool - another example of our technology triumphing, once again.  And like them or not, drones are here to stay.  But most folks haven't thought through where this is going, or where it will lead to.  Most Americans are clueless.  They get their information from Fox News.  Eat your media kibble and shut up.  Good Dog!

Right now, the U.S. is the king of drones.  Our European cousins are scrambling to catch up, as are the Chinese.  I am sure the Russians are taking a stab at it, but with no developmental budget, it is hard to get going.  Our wars in Afghanistan and Iraq, however, have provided steady funding to our drone projects, and moreover, we are gaining valuable real-world experience with them.  Our drones work and are battle-tested - and we have learned firsthand how things can go wrong, and made fixes - and are still learning.  War advances technology like nothing else.

But it is akin to the U.S. after World War II.  For a brief period of time, we were the only country in the world with nuclear weapons.  And then, in 1949, the world changed, as the Soviets detonated their first bomb.  Suddenly, we were not the only game in town.

At the present time, we reign unopposed, in the drone arena.   We can launch drones over other countries with impunity - blowing up the bad guys as we see fit.  It is, to say the least, pretty cool, even if, on occasion, we might blow up the wrong people - what we euphemistically refer to as "collateral damage".

But already, people are starting to think about where this is heading, and whether an Arms Summit on drones may be necessary.  Suppose the major powers in the world all start using their drones to advance their own interests?  Third-world countries would be treated to a number of surprise explosions, on a daily basis.  The Chinese are trying to exert influence in an African country, rich with titanium ore.  Suddenly an opposition party headquarters explodes in the night.  Meanwhile, the French, trying to gain traction, also act.  And perhaps we send in a few drones to "keep the peace" as well.  It could escalate into an ugly mess in short order.

And suppose someone flies a drone into our country?  It is not hard to do, a surface-skimming drone, flying far under any radar, enters our airspace and launches an air-to-ground missile at a strategic target - or just augers in, containing a bomb-load on-board.   Suddenly, drones don't seem like so much fun, anymore, when it is your house that appears in that infrared video on YouTube.

The second problem with the drone wars is that smart Engineers in these target countries will find cheap, backdoor ways to bring down drones.  When I was in college studying Electrical Engineering, most of my instructors and fellow students were from Yemen, Iran, Iraq, Saudi Arabia, Malaysia, and other Arab or Islamic countries that seem to be on our target lists lately.   And these were very smart folks, too.  Regrettably, Americans prefer not to study Calculus, but to major instead in Women's studies, African-American studies, or, lately, something called "Queer studies" (and we wonder why unemployment is so high).

So, our opponents - all trained at American universities and colleges - will find ways to bring these things down.  And often, these ways are not so high tech.  Until recently, the video feed from these drones was broadcast, unencrypted, free for anyone to pick up.  I can only imagine the conversation at an Al Qaeda safe-house in Pakistan:

"Ahmed! I have the infidel's drone transmission on my laptop!"

"Very good!  Say, why does that house in the video look familiar?"

"Hardening" of our drones will be the next step, as well as hardening of the communications channels.  And of course, one way to avoid problems with jamming and other electronic warfare techniques is to make such drones semi-autonomous.  So that, in the absence of human command signals, they don't so something stupid like land in Iran.  And as they become semi-autonomous, then perhaps autonomous, and then perhaps - well, it ends up like a "Terminator" movie in short order.

And that brings us to the third problem.  Most of us think of drones as aircraft, flying over "someone else's" airspace.  But the drone concept can be applied to land vehicles, such as the frightening little nightmare shown above.  I was shown such a vehicle at ARL once, and I had nightmares for weeks.  In my dream, I was running through the woods, trying to escape these vehicles.  But they kept coming after me, relentlessly.  Using infrared vision, radar, and other sensors, they could find me, no matter where I hid.   And with computer-guided machine guns, could kill me in an instant.  I might be able to destroy one or two machines, but they had hundreds.

And that is the nightmare awaiting opponents on the battlefield - the robotization of warfare.  When we sent out hundreds or thousands of disposable robots to track down and kill.

And while present-day drones are the size of small aircraft, in the future, such drones could be the size of a small dog, or perhaps even a fly.  You swat at a fly in the heat, not realizing that it was a CIA micro-drone, injecting you with ricin.

In short, nearly every nightmare scenario you saw in the Terminator movies could likely be a reality.  Except of course, that Hollywood hacks really have little in the way of imagination.  Micro-drones, nano-drones, land-based drones, you-name-it, chances are, someone is developing it - and it is no big secret, either.  It is all on Wikipedia or the Discovery Channel.

And of course, electronic hacking of such drones will be the other half of the battle - figuring out ways to intercept messages or spoof messages to and from drones.  If you can take control of a drone and re-direct it at its owners, well, that is far cheaper than actually building one of your own.

And speaking of building your own, how hard it is it to take a radio-controlled airplane, fit it with a grenade, and then fly it against an opponent?  While our drones may be high-tech and cost millions of dollars apiece, crafty insurgents may be able to counter-strike with primitive aircraft, using parts bought at a hobby store.

Like I said, this is a scary new world we are facing, and yet, few people give it much thought.  At the present time, our drones seem like cool toys - blowing up the bad guys at no risk to us.   But where this is going - where the future lies - is readily apparent, and yet no one gives it much thought.
Newer Post Older Post Home