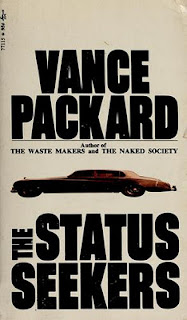 How does class and status affect the way we spend?


Aside from the lowest class, the worst credit risks in America appear to be the upward strivers of the semi-upper class....

A builder in suburban Houston cited one higher-income suburb favored by middle-level oil executives as having "the worst credit rating of the Houston area."  And, he added, from sad personal experiences, "I want no part of the market for the high-priced home in the $250,000 to $400,000 bracket. The most dangerous group to do business with are these people who have salaries between $100,000 and $200,000.  Specifically I'm talking about junior executives who have higher-class taste but still don't have the money.  They've got to join the country club and buy a second car and probably a boat and have regular cleaning woman.  I call them the Second Louies of Industry.  You can have them!"

The above quote is from Vance Packard's The Status Seekers,  copyright 1959.  I have altered the quote to change "Detroit" to --Houston-- and added a zero to each of the dollar amounts.  With these two small changes, the quote has been updated from 1959 to 2009 - a 50-year span.   With these two small changes, the above quote could have been uttered today.

I recently checked out this book from our library (I no longer buy books anymore, at least not regularly) as well as his The Hidden Persuaders (1957)  and The People Shapers (1979).  What he has to say about people and human nature is interesting, and far from being "dated" is as true today as it was then.

Writing initially in the 1950s, Packard was observing the beginnings of our mass-media and consumer culture.  People were just starting to be manipulated on a mass-scale, and Packard was alarmed at the trends.  In the postwar prosperity of the 1950's, people sought status through their purchases of cars, houses, clothing, and even food and drink.  And a complex arrangement of social cues was provided to supply consumers with information as to class status and class state.

When I started this blog, I was, as a member of the "semi-upper class" trying to figure out why, after making literally millions of dollars over my lifetime, was still struggling to pay the bills every month.  I mean, when does this stuff ever let up? In the grave?

And if you listen to people, you hear often the complaint, "I am living paycheck to paycheck" from people making $100,000 a year or more - often far more.

And that was the point of this blog - to figure out, for myself, why people in the middle class - and upper middle class (if there is such a thing, Packard has some wisdom on that, for another posting) seem to struggle so much.

When I read the above quote, it jumped off the page at me.  The problem for the upper middle class is that they often want to strive for a lifestyle just out of reach.  And as a result, they engage in the same poor choices that the very poor engage in, which is to say, taking on debt, living beyond their means, and owning too much stuff.

The middle class and lower-middle class seem to suffer less from this. Why?  Because they realize that they can't afford to screw it up as their income is finite.  They budget and spend carefully because they have to, not because they want to.

In the responses I read to this blog, the folks who seem to be the most thrifty and the most sound in their financial planning are not folks with millions, but folks trying to get by on the median salary - or less.  In postings in other forums, when people talk about "struggling" to get by on $75,000 a year, you regularly hear from people making less than half that, saying, "I spend less than I make, I budget, I scrimp, and I save, and it works out just fine."

It would seem we have a lot to learn from this class of folks.

It is all-too-easy, once you start making money, to want to spend it - and spend it a lot, on status things and toys.  And there is nothing wrong with that per se, provided you are not borrowing to do it, or foregoing saving for the future.  But in many cases, the upper-middle-class does just that - spending every penny they have - and a few more - on luxury goods and then crying like a baby when it all goes horribly wrong.

For example, I have a much-used BMW X5.  I paid $25,000 for the car, used, when it was five years old.  The sticker price on the car, new, was $53,000.  Two Dentists owned it before me, and paid about double to own the car for five years than I have paid for the last five (the car is worth about $10,000 today).  It is not a bad car, but it is expensive, and I am not sure I would buy another one.  Hopefully, it will give me at least another five years and 50,000 miles of service without needing major repair.

And certainly, I would not buy a brand new one, under any circumstance short of winning the lottery.  In my income bracket, owning a $53,000 car is just out of the question.   (Today, the same car sells for $60,000 or more).

But, there are others in my income bracket who were not so smart.  Many leased these vehicles on the premise that they could "afford the monthly payments" and then at the end of the lease, discovered that (a) they owed thousands and thousands of dollars in turn-in fees for excess mileage and wear, and (b) they were walking.  Often, these folks end up leasing yet another vehicle, as they do not have the cash to pay the turn-in fees.  They hemorrhage $500 to $1000 a month, for years and years, because they cannot "afford" to come up with $25,000 cash to buy a car.  It makes no sense.

Others end up buying the car outright and are shocked to discover, once the warranty expires, that a BMW can be a staggeringly expensive car to own, out of warranty, unless you have a garage full of tools and access to inexpensive parts online.  Having the car flat-bedded to the dealer for oil changes is just out of the question, when you are paying the tab.  But this simple concept eludes many.

So, they go online, "outraged" that the car has broken down and wanting BMW to pay them to have it fixed.  Of course that Ain't Gonna Happen.  And of course, that is not the real reason they are upset.  The real reason, of course, is that they paid too much for a car they cannot afford, and cannot repair it themselves, and as a result, it has placed them in financial strain.  That is what they are upset about.

But what about the really rich?  Don't they buy all this crap?  Ironically, No.  The very rich, as Packard reported back in 1959, tend to favor older, tried and true things. They don't have closets full of designer labels, but prefer the more tweedy, British look.  They dress down more often than they dress up.

I reported before that in my hometown, there was a couple who were very wealthy.  She was from an "old family" that owned a lot of land, and he was an Auchincloss, heir to "old money" and a brilliant surgeon and pianist in his own right.  If you saw them in town, you'd never know it, though.  She might be wearing her Wellington boots and driving a very rusty old Chevy Blazer.  The very rich don't need to put on a show of their wealth.  They know they've got it.  They don't need your validation, nor want it.

And most people don't get this. They assume the nouveau-riche are exemplars of wealth - the Donald Trumps of the world, loudly showing off apparent wealth in a gaudy display of excess.  But of course, these are only the more obvious examples of wealth that are readily apparent for display (and want to be displayed and seen).  Real wealth is more restrained.

So, you might think the guy with the Lexus is "rich" - but in fact, he is in debt up to his eyeballs and not really wealthy at all.   He may have an income slightly higher than the average, but since he is spending it faster than average, he is not accumulating wealth, but rather dissipating it.

And that is the lesson I have been learning over the last few years - and indeed one the entire country has been learning (or should - many people prefer to blame Obama).  We tend to seek out status and pay for it with borrowed money.  We convince ourselves that we are entitled to granite counter tops and stainless steel appliances, not because we can afford them, but because "someone in our situation" has such things.  And they really are very trivial things.