Will Housing Prices Bouce Back? No. 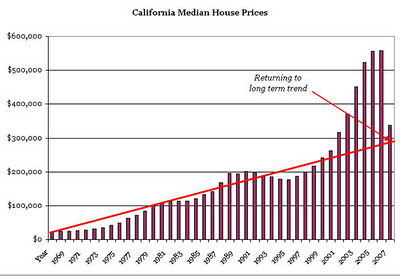 This chart of California home prices neatly illustrates how the bloated pricing of the last six years was not a norm, but an anomaly.  Prices today are closer to the norm.
A lot of people are "hanging on" to their homes, even as they are upside-down, in hopes that the prices will "bounce back" to 2007 levels.
Three words for you:  Ain't....Gonna....Happen.
Why?  Simple.  The prices from 2002-2007 were a bubble - and inflated price that had nothing to do with reality.  And when bubbles burst, things return to normal.   And normal is pretty close to where we are right now.
Home prices today will go up maybe a percentage point or two, per year, for the next few years.  In some markets they may remain flat.  In others, they may drop slightly.
But under no circumstances are home prices going to shoot up 30% in one year.  Get used to that.
If you are "upside down" on your house to the tune of 30-40%, you may have a long, long wait, just to break even.  If you bought at the peak of the market, in 2007 or so, you might be in for a long wait.  If you bought in 2001-2002, you might have a small amount of positive equity,
The smart folks are the ones who walked away early on - doing a deed-in-lieu of foreclosure, short sale, etc.  The dumb ones are the ones who burn through their 401(k) to make mortgage payments, ending up still upside-down, underwater, and now with no retirement to look forward to.
If you look at the chart above, you will also see the effect of the bubble of 1989 - a much smaller bubble, in the context of today's bubble, but if you re-drew the chart ending in 1992, and enlarged the scale, it would look just as scary.
And if you are astute, you may notice that the prices after the 1989 bubble - around 1993-1995 are actually depressed.  And yea, that was a good time to buy Real Estate.  And yea, that is when I bought it!
So, moving forward, there may be such a similar depression.  Why?  Because when bubbles burst, prices bounce back below where they should be.  Emotional euphoria drives prices higher and higher.  Emotional depression drives them lower than where they should be.
I'll tell the story again:  When I was buying Real Estate in 1995, my friends all told me I was an idiot - after all, they "lost their shirts" in Real Estate in 1989!
And of course, in 1995, they were all investing in "dot com" stocks.  Sound familiar?
By 2002 or so, those same friends, burned by the dot com debacle, asked me how I was doing.  I told them the Real Estate thing was doing well, and they all jumped in - after the ship had sailed.
And yea, they all lost their shirts in 2008 (my friends have lots of shirts, apparently, to lose) and are not looking into buying dot com stocks again.  Hey, how can you go wrong with a Facebook IPO?
Are you paying attention?  Do you see a pattern here?
There may be some bargains in the housing field in the next few years.  But if you are already upside-down on your house, don't expect a quick turnaround, though.
This is not to say you should walk away from your house - that depends on your circumstances.  One foreclosure property I bought for $95,000 had a mortgage of $140,000.  I talked to the previous owner, and he had "held on" as long as he could, then walked away, convinced the home would ever be worth $140,000 - ever, ever.
Five years later, I sold it for $285,000.  Sometimes it pays to be patient.
This time around, though, I wonder if we can count on Real Estate Bubble #3.  After all, people are stupid, but not that stupid.  Right?
Well, I could be wrong about that.  Facebook stock, anyone?
UPDATE 2021:  After more than a decade of painfully slow increases in housing prices (in most markets) the market took off this spring, with prices rising in many areas and sales brisk.  That begins said, our house today is worth.... slightly more than it was worth in 2008.   The present situation, with panic-buying and escalation clauses has all the markings of.... another bubble!   Now the Fed is talking about raising interest rates. Gee, I wonder what that will do to housing prices?
Newer Post Older Post Home