Why Are the Best Christmas Displays in Poorer Neighborhoods? 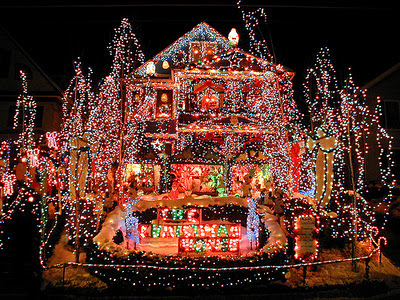 The best Christmas light displays are not in the rich neighborhoods, but in the lower-middle-class ones.
If you want to see some of the best Christmas light displays, head over to the poorer neighborhoods.
Every year, when we lived in Alexandria, Virginia, we would load up in the old Mercedes and go looking at Christmas displays.  Of course, we never went to rich neighborhoods to do this.  Rich folks have few, if any displays, and if they do, they are restrained.
No, no, the best displays were in a neighborhood called Bucknell Manor, a community of two-bedroom, one-bath cracker-boxes built in the 1950's, that never really gentrified much in the 1980's or 1990's.  It was a lower-middle-class neighborhood and would always be so.
But the light displays!  Amazing!
Now, granted, in very poor neighborhoods, you might not see great light displays.  Go up one notch and all hell breaks loose.    Raised  ranch tract homes are coated in lights.  But go into the fancier developments, and you see little or nothing.
What is going on here?  Why do people who are at the median or below, on our economic ladder, spend thousands and thousands of dollars on holiday displays?  It is an odd phenomenon.
Inflatable Christmas Displays are the latest thing, of course.  And at about $50 to $100 each, they are not cheap.  Made in China and inflated using a small blower, they can be found online or at your neighborhood "big box" store.  After about a year or so, however, they start to look soiled and nasty.  But people still put them out - and add more displays every year.
Driving by a shot-gun shack on Route 17 here in South Georgia, I saw the most depressing looking house imaginable.  But, they had no fewer than 20 of these inflatable displays on their burnt-out lawn.  I quickly calculated that they had at least $1000 to $2000 in Christmas display items on their lawn.  They had more invested in Christmas displays than in their cars!
What is going on here?  How do they afford it?  How do they find the time?
In terms of affordability, it is again one of those Credit Card "death by a thousand cuts" deals.  They may buy an inflatable for $79.99 - the target price for any specious credit card transaction.  Taken by itself, one Rudolph inflatable snow globe isn't going to bankrupt anyone.
But then another is bought, then another, and it snowballs (if you'll pardon the pun) into a lawn orgy of icicle lighting (left up all year, natch) and tree lighting, and multiple inflatables.  And before long, a person to whom money is very dear, is finding that their Credit Card is over its limit, and come February, when the bills are due, winter is depressing indeed.
Another recent trend, again Chinese made, is the wire-form display, where a metal form, usually painted white, has a string of lights on it, or rope lighting.  These are often seen in the form of reindeer, sometimes with animated moving heads.  We had some of these and after a year or two, the paint starts to rust off, and parts of the strings of lights go dead - and are hard to fix.  They were fun, I guess, but not cheap, either!  Everything from China seems cheap, but the costs add up, over time, when you end up throwing most of it away in short order.
Now of course, I can hear the chorus of complaints already.  To even question Christmas Orgy spending is to be accused of being a "Grinch" or some sort of Bah-Humbug Scrooge.  Some folks even post things online about how spending money is a patriotic duty in our consumer society!  As if to say that if we don't buy more Chinese-made crap, the entire planet will cease to rotate on its axis.
But that is not what I am saying, of course.   If you want to see the best Christmas lights, cruise the poor neighborhoods - and enjoy the show!  But that doesn't mean putting up such a display yourself is a wise use of time, money, and electricity.
One reason wealthier people probably don't have such displays (and No, it is not because they are "all Jewish" - that's just anti-Semitic!) is that they value money too highly to spend thousands of dollars on light strings and extension cords.  And chances are, if they are professionals (Doctors, Lawyers, etc.) they simply don't have time to do all that.  Some folks actually hire people to decorate their Christmas trees for them, they are so busy (no, I am not kidding, Mark did this one year).  To me, doing without a tree or scaling back decorations seems like a more reasonable approach.
And although you might find some gaudy displays of excess in wealthy neighborhoods, typically the folks putting up such displays are, well, nouveau-riche.  When we lived in Florida, we would often take a drive along A1A to see the fancy mansions on the water.  And most of these had very restrained decorations.  That is, except for the guy who made his fortune as a car dealer.  His house was over-the-top, of course, much to the chagrin of his neighbors!
And of course, lighting display contests are part of the problem as well.  People become very competitive when a contest is announced, and the Griswold family is going to make sure the neighborhood trophy this year stays in their living room!
Of course, these sorts of displays often cause problems for the neighbors, as traffic backs up along the street, slow-speed car wrecks result, and bad feelings abound.  People end up in court over these things.
For me, personally, I don't plan on plunking down hundreds or thousands of dollars on light strings, extension cords, inflatable displays or wire-form reindeer this season.  However, this is not to say I won't enjoy cruising the tract-home developments to admire such things.  After all, the best things in life, are free.
Newer Post Older Post Home