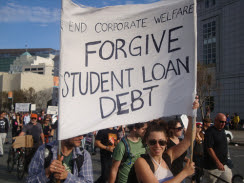 What does ending Corporate Welfare have to do with not paying off your personal debts?  Am I missing something here?


A lot of the "OWS" people are upset about student loans.  Apparently, they took out a lot of them, paid too much for college, had a good time, and now don't want to pay it back.

A natural reaction, I think.   I once bought a car, paid too much for it, drove it like stink, and then didn't want to pay back the loan.  But, since I signed the loan papers, this pesky little business of contract law intervened, and I was forced to pay it back.

Well, that and the antiquated idea that I had, that, since I agreed to pay it back, I should.  After all, it was nobody's fault but my own that I stupidly paid too much for something, and agreed to onerous loan terms.

And when I graduated from college, I was horrified to realize that I had racked up $40,000 in student loan debts.  And a lot of this debt was unnecessary.  Yea, I lived pretty large during college.  I bought a brand new car, sold that and bought a used car.  I remodeled my kitchen.  I bought a house.  I was working at the time, and had money to pay for school, but I chose to borrow instead.  I could have done without the new car and the kitchen, and been debt-free.

And other students make similar bad decisions.  And I know this, as I spent 14 years in college, and saw firsthand how college students live - few are starving, at least based on the number of pizzas and chicken wings I delivered.  Yea, kids do that - drink beer, smoke pot, send out for pizza, and get shitty grades in gut courses and party - and they put it all on a student loan.  No one wants to make sacrifices, it seems, if they don't have to.  The Flesh is weak.

But, I buckled down and paid off the debt, and it took 10 years, because I politely declined their 30-year refinancing offer.  And yea, at the time I graduated, it seemed like I would never, ever pay off that debt!. But a funny thing happened, I got a better job, I made more money, I made a little on my investments, and, well, as I approached middle-age, $40,000 seemed less like a scary amount of money, but what people were paying for new cars.

Today is no different.  And I am not unsympathetic to the plight of these former students!  It is just that they are protesting the wrong offices.   They need to "Occupy" the Dean's Office, not Wall Street.  Ask your hippie parents how its done.  Schools have been raising tuition 2-3 times the rate of inflation, and then telling you to get a student loan to pay for it - providing the poor normative cue that "that's how it's done" - without bothering to explain to these 18-year-olds that they are buying the equivalent of an overpriced Las Vegas Condo, on spec.

But saying it is Wall Street's fault is stupid.  It is your fault, first and foremost.  It is the College's fault, perhaps secondarily.  And the financiers are maybe coming in third, along with their friends in Congress who made it impossible to get out from under student loan debt.

Some "OWS" protesters asked people to sign a pledge to default on their student loans.  Their theory was, if everyone did it, some sort of reform would be coming.  It was akin to a suicide pact, and not surprisingly, not many signed up - other than those already in default, or some particularly stupid kids who were willing to screw up their own finances to help someone else's "cause" - and we've talked before what a stupid idea that is.

Saying that you will never pay back your student loans or that you expect "relief" from student loan debt, is just weak thinking - wanting what you want, because you want it.  And it is unfair to those who are paying off their student loans - or already have.  People who made different choices and smarter choices - for example, to borrow less, go to a different, cheaper college, or to major in something that will lead to employment to pay back the debt.

And if you think student loans were a scam, well, get used to it.  Because the rest of your life is going to be fighting one bad idea after another - from cell phones to cable TV, to new car dealers, to overpriced Real Estate, well, nearly everything in the stream of commerce.  You have to be an astute consumer, not a blithering idiot, jumping at whatever the TeeVee says is a bargain or whatever "everyone else" is doing.

Because here's a clue: Everyone else is usually jumping off a cliff with the rest of the Lemmings.  No, seriously.  Most people are in economic self-destruct mode, all the time.  And we all are, at least some of the time.

So, what is a better idea than protesting Wall Street, or defaulting on your debts?  Here are some suggestions:

1.  Get the word out to your friends who are still in college that student loans are no joke and they should think long and hard before taking them out.

2.  Get the word out to your younger siblings and their friends in High School that college is not just a big party and a chance to smoke dope, drink beer, and get laid.  It is very expensive, should be approached cautiously and intelligently, and borrowing huge sums is a very bad idea.

3.  Protest at the Dean's office, or help organize a protest at your school.  Realize that the Unions representing the unskilled workers at your school are NOT YOUR FRIENDS (How many students sympathize with the Janitor's Union, not realizing they are making 3-4 times local wages and perhaps more than they will, as college graduates, and more over are part of the reason school tuition is so high?).   There is no legitimate reason college tuition should be as high as it is!

4. Work out a plan to pay off your debts.  Get rid of the iPhone (yes, we all saw you "OWS" protesters with fancy phones that we working people can't justify owning).  Sell it on eBay and cancel your plan. Dump cable, sell your car, whatever it takes.  And of course, get a job.  And yea, you may have to take that refinance offer, to amortize your loan over 30 years.  But 20 years from now, you can probably pay it off, once you become successful, which you will, if you put down your protest sign and look out for your own best interests.

Yea, you got a raw deal.  Newsflash:  We all do, whether it is buying an overpriced mini-mansion or buying a new car, or running up credit card debt.  You are not unique in any aspect more than anyone else.  But the common denominator is that we all signed up for these debts - we all put our John Hancocks on the bottom line.  We were hardly innocent parties in these transactions, or unwilling ones.

FOOTNOTE:  Not paying back your student loans is a really bad idea.  Why?   Because as I noted before, our elders tried that whole "I'll declare bankruptcy and walk away from student loans" thing, and Congress closed that loophole.  Today it is very hard to get relief in bankruptcy court from Student Loans.  And even conventional debts today are surviving bankruptcy - interest may be forgiven, but often the principle has to be paid back.

And of course, penalties and other charges kick in, once you stop paying, so things just snowball out of control, if you take that course.

If you end up in bankruptcy, your job prospects will be limited.  Your ability to even rent an apartment will be limited.   Your whole life, in fact, will be screwed, as you will end up going from one crappy minimum-wage job to another.  And I suspect that is where a lot of these "OWS" kids are heading - to economic oblivion - like my pot smoking friend, who, at age 50 is living in his parent's house, working unskilled low-wage jobs, and has no money in savings, 401(k) or even Social Security to count on.

I think a better approach might be to take stock, talk to the loan people, and see what your options are.  My loans were all deferred while I was in graduate school.  So I did not start paying them back until age 32.  If you squandered a college career on pot and pizza and a degree in communications, perhaps grad school is a good idea.

But this time around, be smart.  Get a degree that leads to a job.  Live at home if you have to - pinch every penny and borrow as little as possible!  We all get a do-over in life, and this could be yours.
Newer Post Older Post Home