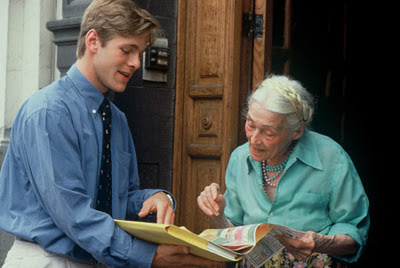 The position of 'Manager Trainee' doesn't exist, really.  But it sounds appealing and people apply for that reason.  Usually, it is a con-job, not a real job.  9 times out of 10 it is an MLM scheme or door-to-door sales.


I mentioned in the last post about people who don't pay employees, and what scumbags they are.  But there are a LOT of employment scams out there, where people prey upon the desperation of the unemployed, which is a pretty low thing to do, to be sure.

I thought it would be a good idea to relate a true story in this regard, that happened to me, back in 1986.  I did not get conned, as I saw through the scam pretty quickly.  But it was an interesting scam to observe, and these sorts of folks are around in one form or another, even today.

If you want an inside peek at how these sorts of con artists work, rent The Great Wall of Sound from Netflix.  It is not the same scam, but some of the hallmarks are similar.

I had just graduated from school and was looking for a job.  My boss at UTC told me that they were moving the EE department to Hartford, and that they would be downsizing in a few years.  He was right, too, and working there would have been a dead-end.  I applied at a lot of places, sending resumes out, going on job interviews, and perusing job postings at the placement office at school.  I also sent out "cold" resumes and cover letters to companies - all the usual gambits.

And I checked the want ads in the local newspaper, too.  And since there was no "Monster.com" back then, there were one or two real ads in there, for example, one from a local Steel Mill that wanted someone to maintain their creaky older British-made relay-logic system for their rolling mills (what fun!).

Needless to say, I am glad I decided to get into the Patent Business.  Engineers these days are treated like dirt.

But one ad caught my eye.  It said "Manager Trainee wanted!  No experience necessary!  Make $50,000 in the first year!"

I strongly suspected it was a con-job, but since I had to drive into the City for another interview, I thought I would see what it was all about.  They told me to show up at 10:00 AM the next day.  I tried to ask questions as to what the job was all about, but they were vague and evasive, and told me that everything would be explained at the "interview" and that this was a great opportunity for a hard-working individual.
I stopped at the address the next day, about a half-hour early.  It was an older, smaller office building that had seen better days - the sort of place that might have once housed a Dentist's offices.  Inside, they were unpacking boxes and the phone company man was wiring up the phones, which were scattered on the floor.

One of the "managers" met me, full of enthusiasm, and lead me into his "office" which had a battered desk in it.  "Excuse the mess," he said, "but we're expanding rapidly in this market!  And this is a great opportunity for you to get in on the ground floor!"

We talked a bit more, but he was evasive when I pressed him for more details.  He said the "interview"would begin at 10:00, and at that point, I noticed a number of other people trickling in.  Now at this point, I figured out that this was a con-job.  But my curiosity made me stay around to see exactly what they were up to.

By 10:00, about a dozen people had arrived.  Most were casually dressed and clearly not "manager trainee" material, but rather unskilled workers.  Listening to their conversations and talking with them, I realized that most were either unemployed or were working at, or had worked at, minimum wage jobs all their lives, usually in restaurants or the like, and were looking at this as an "opportunity" to get ahead.

The "Manager" I talked to, Chuck, lead us all into the "conference" room, where we had to stand, as there were no chairs or other furniture. The whole operation had a fly-by-night feel to it.  We were told again and again what a great "ground floor" opportunity we were being offered, but without any specifics as to what it was about.  Some others came in and gave testimonials about how much money they were making and how they could afford to buy a new car, and that sort of thing.

We were lead in a series of cheers, in sort of a call-and-response kind of thing.  "Does anyone here want to be a SUCCESS?  Can I hear you say YEA???  YEA!!!!"  - that kind of thing.  It had the feel of a revival meeting.  And of course, all the "Managers" and people giving testimonials all had that plastered-on kind of plastic smile that only televangelists and sociopaths (once again, I am being redundant) have.

They took their sweet time explaining the con. "Everyone likes music, right?" they said, "All your friends like music, right?  How much do you spend on records and tapes every year?"  Of course, this was before CDs, when we still used Cassette tapes.

Charts went up, showing record industry sales, retail sales for record albums, etc.  Then came the pitch.  What we were to do was become "distributors" for music.  It sounded pretty glamorous.  What the real deal was, of course, was that we were to sell cassettes door-to-door and to our friends.

And of course, the hook was, we had to buy the "starter kit" of cassettes, for only $500.  And with that "starter kit" they would give you a box of cassettes that the record stores couldn't sell, and likely you wouldn't.  That is, presuming you got even that, and they didn't in fact just take your money and move on to the next town.

I slipped out the side door.  One of the managers intercepted me. "You aren't leaving now, are you?  This is a GROUND FLOOR opportunity!"

"Look," I said, "You don't want me in there.  If I stay there, I will have to loudly say what a rip-off this is, selling cassettes door-to-door.  So I tell you what, you go your way, and I'll go mine."

He let go of my arm and let me go, nodding in understanding.

I suppose I should have gotten up at the meeting and said "Hey, everyone, this is all a ton of BULLSHIT!  Walk away from this!"

But, I suspect it probably wouldn't have done any good, and 25 years of experience since then have confirmed this.    When you tell people something is a rip-off, not only do they not believe you, they actually defend the people ripping them off.  And moreover, the rip-off artists will spin your outrage into their favor.

"Well of course Mr. [Disgruntled Former Employee] says this is a con.  But he just didn't work the system properly!  If you don't want to do the work, you won't be a SUCCESS!  And who wants to be  SUCCESS!  YEA!!!"

Let's face it, you can't argue with that "logic."

It was an interesting experience for me, to see this seamy underside of the world.  And it saddened me to think that these hard-working but not-very-bright folks were being conned out of money as they tried to climb our socioeconomic ladder.

But such schemes have been going on for at least 50 years, if not a century, and it is clear that we can't rely on the Government to shut them down - you have to rely on your own internal compass and skepticism.

I mentioned before in this blog how a hapless friend of mine was briefly snared in telemarketing jobs.  Graduating from Expensive University with a useless degree and a 2.5 grade average, he was shocked to discover (as the Occupy protesters are) that no high-paying jobs were waiting for him.

He answered an ad for a "Manager Trainee" and got a job with a company doing what is called the Freezer Scam.  He sat in a telephone "boiler room" cold-calling people and offering to sell them a side of meat for a startling low price per pound.  Many folks jump on this offer, as it sounds "Too Good to Be True".  However, since most folks don't have the space for a side of beef, the company helpfully offers to sell them, on time, a freezer to put it in.

And the gag is, of course, that the freezer is sold for nearly double retail price, plus interest.  It is hardly a good bargain, and when you get done paying for the freezer, the interest, and the electricity to run the freezer, well, the price per pound of that side of beef is more than what you'd pay at the grocery store, retail.

He quit that job after a few weeks and answered another "Manager Trainee" ad, which turned out to be selling vacuum cleaners door-to-door.  The product was not bad, just overpriced by a factor of at least two.  They took the people out in a van, and dropped them off in poor neighborhoods.  They then walked door-to-door trying to convince people to spend $600 on a vacuum cleaner, paid for "on time" of course.  He made one sale - to his Mother, before quitting.

Such "jobs" are really not jobs at all.  And in many cases, they don't pay, they leave town, they pay little, they pay on commission (which results in you making less than minimum wage) or they ask you to buy a "starter kit".  Just walk away from these sort of things.

And the effect on the people involved is devastating.  The folks who go for these scams end up ripped off, depressed, and convinced that life is just one big con game, and that the whole system is rigged.  And this has a corrosive effect on our society as a whole.  Every person ripped off in scams like this is one more person not willing to defend his country against outside aggression.  Why bother?  His country wasn't there to defend HIM.  And in fact, the government institutions PROTECT the con artists in many situations.

But alas, that ain't about to change soon.  Many of these con artists take in tens of millions of dollars annually - enough to buy Judges and Congressmen.  Yes, in some States, Judges are elected, and campaign contributions talk.  Act shocked.

The only defense, therefor, to the con-games and rip-offs is your own internal compass and your own skepticism.  When someone offers you something-for-nothing, you just have to walk away.  Whether it is Glenn Beck selling gold, people offering free ponies, or job offerings for the mythical position of "manager trainee".