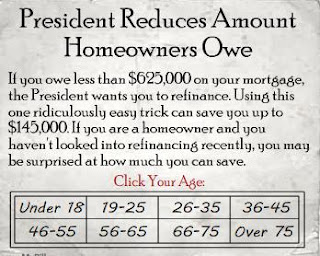 This is just a pitch for refinancing.  The 'ridiculously easy trick' is to refinance over 15 years, thus reducing interest charges.  And no, the President hasn't done anything to reduce the amount you owe.  But this pitch illustrates how people don't understand how their own government works.


You've seen pitches like the one above, which are just come-ons for refinancing deals with staggering junk fees.  "President Obama wants Moms to go back to School!" one ad touts - steering people to odious and overpriced "for profit" schools.

Yea, they are come-ons.  But what is the deal with invoking the name or Office of the President?  Do people really believe that the President is like a King and can do as he pleases?

Pretty much so.  People are idiots.  Don't be an idiot.

Why is it that people believe that the President has omniscient powers?  Should we even allow such folks to vote?  I mean, if you are that ignorant of the basic functioning of government, what business do you have of selecting elected representatives?

Ahhh, but that is why both political parties thrive on "wedge issues" and use them to get elected.  Less than 0.5% of the population contribute more than $500 to a political campaign, so a very few people (and today, corporations!) get to make their voices heard.

And where does that money go?  Well to create attack ads so that people living in the trailer park, who think the President rules by imperial decree, will get out and vote, so that little Bubba won't end up getting gay-married, or Lurleen wont't get an abortion.

It is sad, and it does make one wonder whether Democracy can flourish.  After all, if made-up stuff has the same currency as actual facts, why bother even trying?

Both claims are blatantly false and easily disprovable.  But like the 100-mpg carburetor (that is being suppressed by the oil companies) people prefer to believe in urban legends than in cold hard, and often unfriendly facts.  Weak thinking is the soup du jour these days, and it is popular.  Believe what you want to believe - the pundits tell us.  You can have whatever you want, just by wishing it to be so.

This sort of "thinking" (if you can call it that) gives me pause.  And it also makes me think that perhaps it is not such a bad thing that only the rich are funding political campaigns.  After all, if the sort of wishful thinking people like to engage in, carries the day, then the next Congress will vote to make us all Millionaires and round off Pi to equal 3.

And maybe I feel this way, because I am one of that 0.5% who is willing to do more than blog and have strong opinions about things (and vote).  I actually contribute to campaigns.

So, eat your media kibble.   Vote for your candidate based on distracting wedge issues.  The people actually running things find your little opinions on these things amusing.  Abortion will not be outlawed anytime soon.  Why bother?  It is a great wedge issue and it gets all the Bible-thumpers to vote.  Gay marriage is just icing on the cake.  They won't make the same mistake they did with the gun issue, and actually pass all the legislation they proposed.  Who is going to get out the vote, if your guns are no in peril of being confiscated?

Oh, that's right.  Obama has the power to do that, too, by secret executive order.  I saw a video about it on YouTube.  Better vote for President Perry!