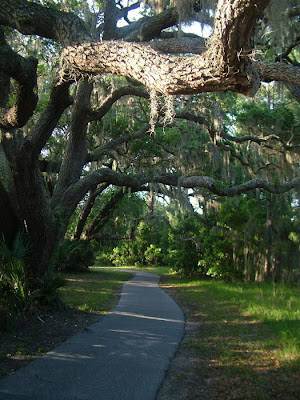 
I live on a resort island.  It is a State Park, and by law, two-thirds of the island has to remain undeveloped wilderness.  It is beautiful here, temperate for most of the year.  And it is largely abandoned.  Not many people come here, and even when they do, the island tends to swallow up folks, so you don't see a lot of people around.

Sounds idyllic, doesn't it?  Yet people scratch their heads and say "Why would you want to live there?"

When we first started coming here, 20 years ago, for Christmas, it was deathly quiet.  I loved it.  We looked at buying a house about 12 years back, but Mark said, "It's kind of creepy and quiet here, don't you think?"

Why live on Jekyll Island?  Why not?


Perhaps it takes time and age to appreciate "creepy and quiet" in life.  And once you have it, it is very hard to go back.

Oddly enough, a lot of folks prefer to live among noise, bustle, stress, and strife.  Neighboring St. Simons Island is far more popular and, of course more populated, and housing prices there are far higher.  Why?  Because unlike our island, over there you can buy a "look at me!" house with a private view, and we don't have that sort of thing here.

Yes, oddly enough, we have the makings of a single-class egalitarian society here.  All the houses were built in the late 1960's and early 1970's, and are largely all alike - two to four bedroom brick ranch-style homes that are largely unimaginative.  You can't tell one apart from the other.  And since none were built on the water or golf course, few have spectacular views or ocean access.  A typical house here sells for about $300,000, which is not a lot of money - to live on a resort island.

But since few of the houses are built on the ocean, marsh, or golf course, this means that the views and ocean access are available for everyone, even visitors, not just a select few of rich folks who can afford to buy it.   In most beach-side communities, the oceanfront is spoken for by rows upon rows of expensive homes or high-rise condos.  Beach access, if it is permitted at all, is provided periodically with narrow lanes and few parking spaces.

And if you drive up and down the coast of the U.S. and Canada, and visit the barrier islands, from Corpus Christi, Texas, all the way to Prince Edward Island, you will see that it is pretty much that way everywhere you go - rows upon rows of beach houses, and a "strip" along Route 1 or A1A, with beach towel shops and fast-food restaurants.  Apparently people prefer to live that way.

Granted, there are a few islands, here and there, that are cordoned off as sanctuaries or preserves, such as Cumberland Island, to the South of us.  You may be able to visit such spots, if you have the money.  But you can't stay.  And you can't drive there.

So, weirdly enough, housing on this island is rather inexpensive, compared to other island communities.  Granted, we have land-leases, not fee-simple lots, but in the greater scheme of things, an 80-year lease is akin to owning the land, particularly when the Authority renews the leases routinely.

But quiet is the thing I think most people here treasure most.  And it is the one thing many visitors just don't get.

For example, we occasionally get a group of bikers that come to the island, mostly out of curiosity.  They grouse about paying $5 each, to get on the island (that fee keeps out a lot of people!) and then when they ride around, well, there is no one to look at them!  They have their straight pipes and ape-hanger bars and their outlaw biker looks, and they ride around, hoping to impress a bunch of people and....

... well, there are no people to impress!  You can drive around here for an hour and not see another human being.  They make one loop of the island and usually leave and never come back.  What's the point of doing wheelies if no one will watch?   What's the point of gunning your straight pipes if there are no "citizens" to annoy?  The "Look at me, Dammit!" crowd gets mightily frustrated here.  We have no commercial strip, no places to "hang out" no places to "cruise".    Just miles of endless deserted beaches, and deep maritime forests.  Whether it is a loud obnoxious bike, a fancy car, or an off-road Jeep with big noisy tires, no one here really gives a damn, if they notice you at all.  And the sort of person who buys junk like that does so, so that people will look at them.  Even negative attention is, after all, attention.  But no attention at all?  They hate that!

So it stays pretty quiet here.  And the culture of belligerence has yet to take hold much.

But quiet is hard to get used to.  And a lot of folks from the big city don't like it here, and leave after a year or two.  They want the noise, the traffic, the McDonald's drive-through and a Starbucks and a Wal-Mart.  They want traffic and stoplights and intersections (we have five stop signs, no stop lights).  They want to be with people, immersed in people, surrounded by people.  They want noise to drown out the deafening silence in their lives.  They need people to impress with their status and to reflect their values.  Quiet is threatening to them - they are no normative cues to focus on.

And once you live in quiet, it is very hard to go back to noise.  I find it hard to drive in traffic now, as people's actions make no sense.  Everyone seems to be in such a freaking hurry, once you get into town or the city, or even on the Interstate.  And in a crowd, well, I am not such a big fan of crowds anymore, which is probably one reason I didn't enjoy our last cruise - people pushing and shoving and brushing up against you, with no sense of personal space.

And yet, many people choose and prefer the latter.  Perhaps I was not raised as part of the hive mind.
Newer Post Older Post Home